"Code or No-Code, figure out the path of least resistance and start building"

Ben is the Founder and CEO of Makerpad.

Makerpad is a content + community + course platform that teaches people how to build internet businesses without writing a single line of code.

Ben started Makerpad as a side project when he was a working at Earnest Capital (now calm company fund).

Before Earnest Capital, Ben was the community manager at Product Hunt.

During his time at PH he came across hundreds of new projects every week.

People were making side projects for fun and learning.

And even for money!

That's what pushed Ben to work on a side projects of his own.

During his time at Product Hunt, he came across the launches of No-Code products such as Carrd, Bubble and Webflow.

He realized, he could build side projects without writing code at all. He just needed to learn to use these No-Code tools.

That's when the idea for Makerpad was born.

Within the first year he was able to grow Makerpad to a $100,000 ARR business.

Makerpad is the leading platform for no-code education, with a community of over 17,000 people spanning all stages of the no-code learning journey.

Ben's vision is to teach everyone, everywhere what can be done without needing to know how to code.

If you go on the Makerpad site you can find tutorials for specific use-cases such as designing an e-commerce store in Webflow or how to clone Uber using Bubble.

Some of these tutorials are free and some are behind a paywall. ($249 annual and $600 lifetime plan)

Makerpad also has featured cohort based courses such as No-Code Fundamentals and Automations at work. - The price for these range from $450 to $850.

The quality of the content and the community has allowed Ben to charge a premium for access.

But Makerpad wasn't always this high-profile content platform that it is today. It's rooted in humble beginnings.

Makerpad started as a side project for Ben.

He wanted to build apps but didn't know how to code. And he wasn't comfortable with spending 9 months learning how to code.

He didn't want to find a technical co-founder as well.

This is how he describes it -

"...there are two parts to it -  which are finding a technical cofounder or you learn code and for me,  I don’t want to spend nine months learning to code and then be able to make a shitty version of an app idea that I may have. When, I was having new ideas every week..."

Ben had new product ideas every week, they were mostly templated apps such as -  AirBnB for X, or Uber for Y.

So he started to dabble in No-Code tools to build them out.

His products themselves didn't get much traction, but the videos and screencasts he put out building these apps generated a lot of interest from his audience.

That's when it struck him, that this could be the business itself.

He had left Product Hunt at the time, and hadn't joined Earnest Capital yet. He was thinking of starting something of his own.

That's when he launched his project newCo

newCo was essentially the version 1 of Makerpad.

It was screencasts of Ben building No-Code versions of popular apps.

It had content that would help people build side projects without code. But it was as recurring revenue business with a monthly plan and a promise of a new tutorial ever week.

Ben wasn't comfortable with that.

He felt stressed out about producing tutorials every week, and felt "indebted" to his users to deliver value to them every month.

That's when he knew the project wasn't working for him.

So he reinvented newCo as Makerpad.

The positioning of Makerpad is that once you pay the annual fee, you get access to the entire back catalog.

It's not the promise of future new content at a regular schedule.

The moment you pay, value has been delivered to you as a user. Everything after that is a bonus!

After 18 months of Ben working on the project full time, Makerpad got acqui-hired by Zapier.

To which entrepreneur Walter Chen replied that either one of them should buy Makerpad.

Zapier's CEO Wade Foster saw that Tweet and got on a call with Ben, that eventually lead to the acquisition of Makerpad.

Zapier positions itself as the glue that binds all the No-Code tools together. You can automate workflows and connect different apps together to build functionality.

The acquisition means that Ben now reports to Wade, but he still gets to run Makerpad the way he wants to.

Airtable and Zapier are the top 2 startups leading the No-Code movement, and it will be interesting so see how things play out in this space in the long term.

The primary motivation for all such acquisitions is to have direct access to customers' attention.

The No-Code movement is the democratization of software development.

It takes  the powers of software way beyond the software developers and into the the hands of makers, designers and product managers.

No-Code is here to stay.

But Ben doesn't think that No-Code will ever replace Code.

Rather, they both live on the spectrum of software development.

The spectrum starts with No-Code, then moves to Low-code and eventually gets to Code.

No-Code is a great way to test out ideas quickly and build functional prototypes.

And if a project doesn't require complex processing, it can run entirely on a combination of No-Code tools.

Makerpad itself has a completely No-Code stack -

There will always be certain projects that will be impossible to build using No-Code, that's where we will need coding expertise.

So there is no "battle" between Code and No-Code, rather it's the perfect separation of concerns -

Ben's advice to Indie Hackers is to focus on the path of least resistance for yourself. If you're more comfortable with code then go with that, if not, then go with No-Code.

But get started and build stuff -

"I think it’s to figure out what is the path of least resistance for them whether it’s code or no-code and I think that the things that the first thing you build will be crappy anyway."

And when you're starting, learn skills by building clones of the products you love -

"look at what is the site or the type of site you look already and how can you build the similar thing or 80% of that thing but for your own interest group. Just do that. It’s okay to like copy these things because that’s the best way you’re going to learn"

ICYMI : Last week I wrote about the podcasting platform Riverside -

Sign up to Listen Up! IH and join 1400+ spirited Indie Hackers who read this newsletter every week. 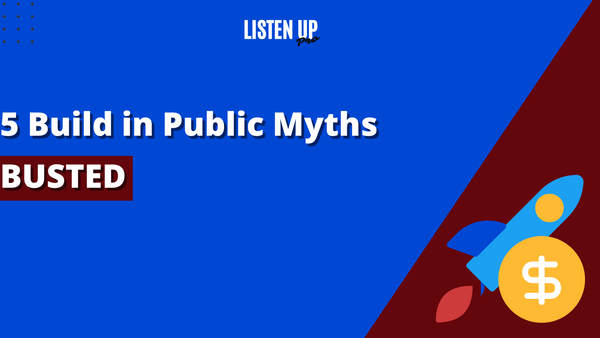 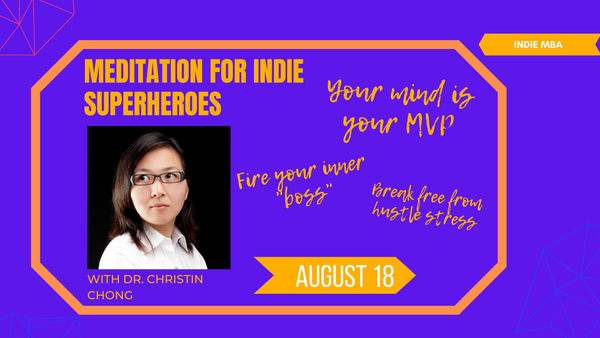