“The Future belongs to Creators”

Tibo and his friend Tom are founders of TweetHunter - A Twitter audience growth tool.

Back in May 2021, they were just getting started, looking for their first users.

They were analyzing and indexing viral tweets into a “swipe file” or a database.

Their product was meant to help creators “hunt” amazing tweets, get inspired by them and write viral tweets of their own.

Fast forward to May 2022, and Tweet Hunter became a $1 Million ARR SaaS.

How did this happen?

What strategies did they use to grow that fast?

Especially in a super competitive market of Twitter tools?

Tibo and Tom came up with the idea of the product as a way to scratch their own itch.

At the time they were shipping a bunch of micro products under the umbrella of their product studio Pony Express.

Tom didn’t have much of an audience at the time, so he started to get more active on Twitter.

But his tweets failed miserably. He wasn’t sure what to tweet, what will work, and how will he be able to grow an audience to get eyeballs on his products.

That’s when the idea of a Twitter swipe file occurred to them.

But it wasn’t a simple swipe file, it was augmented by AI. So it could show personalized results based on the user’s account (and their niche)

This was valuable information, especially for makers who were looking to build a Twitter audience in less time and effort.

No wonder that Tweet Hunter reached $100 MRR in just 3 days of private beta.

Adding tweet scheduling to the product was a natural extension once they had paying users for the swipe file feature.

And then they started using their AI engine to help their users repurpose the best tweets they were finding.

This is an interesting contrast to their biggest competitor Hypefury.

Both ended up doing quite well.

But to get to the next level, they had to deploy some powerful growth strategies.

Tibo bought JK Molina’s info product and then reached out to him to try out Tweet Hunter for free.

And 2 days later, Molina said “if you give me equity, I will promote this thing every chance I get”

This was a tempting offer, Molina had a sizeable audience at the time (around 40K followers)

And most of his audience was deeply interested in growing a Twitter audience to leverage it and sell info products and services.

Tweet Hunter had no presence in that bubble at the time. Most of their users were from “startup/maker/creator” Twitter. (Tibo and Tom’s natural audience)

A partnership with JK Molina meant opening up the product to an entirely new market and getting a new kind of user who was deeply interested in monetizing their Twitter audience.

So this was a no-brainer deal.

They had to take it.

Within 2 weeks of this partnership, Tweet Hunter’s revenue tripled from $5K MRR to $15K MRR.

And it has been a big reason for Tweet Hunter’s growth to $1 Million ARR.

Tweet Hunter has benefited a lot from shipping tons of side projects.

Tibo and Tom are hardcode product builders, they ship at least 1 small product related to Tweet Hunter almost every month.

And they launch these projects on Product Hunt with much fanfare.

Every PH launch is a big event that generates a ton of eyeballs for Tweet Hunter. And since these side projects are free, people love using them.

Some of their most successful side projects include:

One of the coolest side products under the Tweet Hunter umbrella is called WhatToTweet.

It’s a tweet prompt generator. And it ranks on the front page of search when someone searches for Tweet Inspiration.

But the TweetHunter team didn’t build it, they actually acquired it.

Jakob Greenfeld had already built and launched WhatToTweet back in December 2020. He had a great Product Hunt launch, and with time it started getting good SEO traction as well.

This was a potential competitor to Tweet Hunter in the early days, especially since it was a swipe file at the time.

But they didn’t try to compete with WhatToTweet, instead they did the smartest thing possible at the time -  they got in touch with Jakob and acquired the product.

Once they got the asset, they added a link to Tweet Hunter at the bottom of the website, and within weeks it became their 3rd highest source of traffic.

Since it’s such a great domain and has great SEO, WhatToTweet will stay as a steady source of long term traffic for Tweet Hunter.

Another free product that generates decent traffic to Tweet Hunter.

Earlier this year Tweet Hunter made an interesting move that’s unheard of in bootstrapped startups. They offered equity to 12 “Twitter Rock-Stars” in exchange for help and support in growing the product.

They have huge audiences and tremendous influence on their followers.

The details of the deal are not public, but these influencers have been seen promoting Tweet Hunter publicly on various occasions.

This drove tremendous growth as 1500+ people took the challenge and tweeted extensively to grow their accounts over a 3 month period.

Then in April, they doubled down on the micro partnerships strategy by giving away a piece of Tweet Hunter to every user.

So if and when Tweet Hunter gets acquired and the founders get an exit, all of it’s users will make a small fortune as well -

I asked Tibo if this strategy can scare away future buyers, but he doesn’t think that such a buyer will be a good fit for them either way.

The Twitter tools space is highly crowded with new tools popping up almost every day.

But probably the biggest competition for Tweet Hunter is Hypefury. It has been around longer and has a loyal fan base as well.

This is an interesting piece of data that Dan Rowden shared recently.

Top 10 apps for most engagement:

This data is limited, only based on the users of Ilo Analytics, that too only in a specific 2 week window.

With other tools like Typefully, BlackMagic, Ilo and Chirr App close on their heels.

So comparisons are obvious.

But when asked how is Tweet Hunter different from Hypefury, Tibo had an interesting answer:

This is a positioning play that Tweet Hunter is playing.

With so much competition and the barrier to entry so low, it makes sense for all of these Twitter tools to have a unique positioning.

Otherwise competing on features or price can have negative impact for all products.

The competition can be worrying for the Tweet Hunter team, but it’s also the right push they need to go to the next level with their product.

I’ve written a detailed piece on Hypefury before, do check it out - Flying past $23K MRR in 2 years.

🔎 Replicating the Success on LinkedIn

It solves similar problems for users on LinkedIn as Tweet Hunter does for Twitter. But more suited to the context of LinkedIn.

A lot of the UX elements of Taplio are similar to Tweet Hunter, but the backend is 80% different.

I asked Tibo about the differences between the products, here’s what he had to say:

“Working with Linkedin is x10 more complicated than Twitter. Their API is super restricted which forces us to use tricks to do what we want.”

“Taplio and Tweet Hunter have very different target audiences. Taplio aims to equip larger teams and organizations. They have new problems and concerns that we’re just discovering now, so the user exploration face is definitely not finished.

For Taplio, Tibo and Tom teamed up with LinkedIn influencer Alex Berman, I asked them how were they able to pull that off.

“We wanted to replicate what we did with JK on Tweet Hunter which accelerated growth by a lot.

But for Taplio, that was long and painful. During 6 months, we reached out to 30 of them and it was incredibly hard to find someone with the right mindset and audience.

We finally met with Alex Berman and it was a match!”

And partnering with Alex Berman might again turn out to be the smartest move they make.

🤗 Advice for other Indie Hackers

I asked Tibo what advice he has for other indie hackers:

“Something that’s helping me every single day is having an audience. Even if it’s small, I can count on my follower base to help me if I have a question or if I need to push news.

Indeed, an audience is priceless.

Thank you for reading 🙏

I hope Tweet Hunter’s success and it’s strategies inspire you to do great work on your own startup.

I hope you found value in this post, do let me know what you thought of it.

Sign up to Listen Up! IH and join 1900+ spirited Indie Hackers who read this newsletter every week. 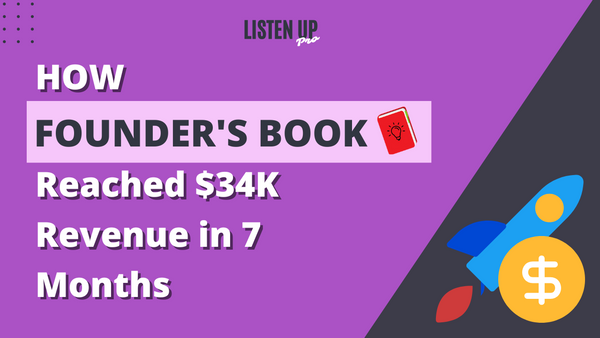 The registration for the August edition of Indie Masterminds closes on July 31st. You will find the program useful if you're a - * SaaS founder * Content Entrepreneur * Consultant/Agency/Service business owner Or if you want to start monetizing your side hustle and plan to quit your job one day.

Twitter can feel chaotic. ​Especially early on, when you're just starting out. Building an audience can get overwhelming. ​It starts to feel like too much "work" and not much fun. ​That is the stage when most people give up on the platform. ​But this is where Kevon's teachings can help you.